Is there a method to its cartographical inconsistency?

In defence of its editorial policy on the maps it publishes alongside its articles, in September 2007 the Economist wrote “we use maps not to portray the world as it ought to be, or even as we would like it to be, but as it is.” Reassuring readers that it bore no malice about its maps of Jammu & Kashmir, it wrote “in using “the line of control” that divides Kashmir in the absence of an agreed international frontier we are merely noting the status quo, not endorsing it.”

So let’s look at its maps of the India-China border.

The most informative of the maps of the border regions came in May 1999 (although giving India and China the same colour allows a degree of chickening out, as Sikkim is both marked out but not coloured as being disputed)

Maps from June and July 2003 are consistent with the Economist’s own stated policy: they note the status quo.

Its special annual publication, the World in 2007, published in late 2006, reported that “China now recognises the Himalayan state of Sikkim as India’s territory”. The accompanying map reflected this position. 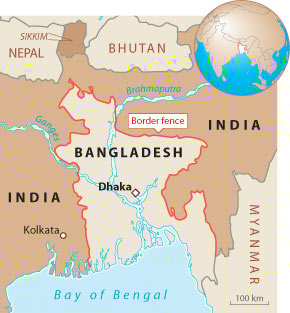 And now in March 2008, the we find a change in the ‘status quo’: the Indian state of Sikkim has been painted in Chinese colours.

Now unless the Economist knows something about the status quo that it is not letting on, it has clearly run foul of its own policy. If there is no cartographical conspiracy here, then is the Economist—unconsciously or otherwise—being a little too eager to please Beijing?