K Subrahmanyam passed away in New Delhi yesterday. He was the single most important strategist in independent India.

I had the good fortune of knowing him since around 2006, and he has been a source of encouragement and support to us at INI, Pragati and Takshashila. He would respond to some of my blog posts and articles over email, wrote for and gave an interview for Pragati, and, despite his age and health, turned up at the first Takshashila executive programme in New Delhi in December 2009.

Nitin Pai: Looking back over the decades, what would you say were the best and worst moments?

K Subrahmanyam: One of the best moments was on 16th December 1971, when we achieved success in Bangladesh and the other has to be split into two—18th May 1974 and 11th May 1998, when we conducted nuclear tests.

One of the worst moments was on 18th November 1962. I was then working in the defence ministry, when I came to know that Prime Minister Nehru had written to President Kennedy asking for American aircraft to operate from India soil against the Chinese. This was when India itself had not even used its own air force. The imposition of emergency on 25th of June 1975 was the second worst moment. 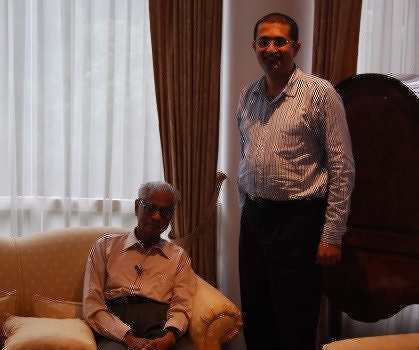 What were the learning points from 1962?

It is a learning point in a big sense. We had an army whose leadership was immature as they had been promoted too rapidly. They were incapable of handling such situations. This was true not only of military but also of the diplomatic community and to some extent it was true of politicians including Jawaharlal Nehru. He was persuaded that it would be either a full-scale war in which case other major nations were expected to support India or that it would remain as patrol clashes. That the Chinese could calibrate the operation so very carefully, mainly to humiliate him, and then withdraw, was something that did not occur to him. It was a very masterful strategy of the Chinese who took full advantage of Cuban missile crisis.

Have the lessons been learnt?

No. Take the liberation of Bangladesh as a case study. Pakistan held free and fair election in December of 1970 under a mistaken assumption that nobody would win a clear majority and the army would still be able to manipulate the country. I was convinced that the army would not hand over power and that we had to be prepared for problems. Then came the hijacking of the Indian aircraft that was blown up in Lahore after which Pakistani planes were banned from Indian airspace. The Pakistanis started building up troops in Bangladesh and the ships were going via Colombo. Everybody knew about it. But we didn’t do anything to warn our armed forces to be ready till 25th March 1971 when Pakistanis began the crack down (See page 21). When asked to intervene on 30th March, the Indian army requested for more time. When they got the time that they needed, they did the job beautifully well. But we did not anticipate this eventuality.

Let us take Kargil as another example. In the Kargil committee report, we have said that the Cabinet Committee on Security should have a regular intelligence briefing by the Chairman of the Joint Intelligence Committee. But the government has not accepted this. There is no sensitivity to intelligence in India. The top decision-makers do not get themselves briefed on the state of affairs. They only expect to get an update if something happens. This attitude still persists and this is a major weakness.

The whole attitude to intelligence needs to change. Professor Manohar Lal Sondhi used to say that since I was the chairman of the Joint Intelligence Committee, I should have nothing to do with academics! During the second world war, all the intellectuals were in intelligence.

American professors used to encourage students to join the intelligence community. Even today, I see many CIA advertisements in university campuses across America.

But when I ask people in Jawaharlal Nehru University to consider a career in intelligence, they simply refuse. Many consider it unethical. [Download the rest]